The optimised scratch hardness tester LINEARTESTER 249 Smart is intended, in addition to its original purpose of application, i. e. to establish the ability of a surfaces to resist damage by scratching, also for several other tests: Scribe/Scratch tests; To and frocycle abrasion tests; Crockmeter tests; MEK tests; tests determining the resistance against solvents in general or wipe test, respectively.

The LINEARTESTER 249 Smart is a tabletop device that is operated via a capacitive LCD display. The electromotive drive ensures a uniform forward motion of the slide. The test tool is lowered and lifted automatically when scratch/scribe tests are carried out. A multitude of different test tools are available (see table in the technical description below). The tools marked with (*) are made of Tungsten Carbide Steel, additionally covered with an extremely hard layer. Due to this layer’s “golden” appearance, any worn parts are visually very easy recognizable because the Tungsten Carbide Material under the “golden” layer has a distincly different color. With the optional available universal adapter set (see last page of the technical description) even also several user-specifc tool inserts can be used.

Principle of the Test: The test panel is fixed onto a mobile slide by means of clamping rails. Above this slide and held on two metal pillars is a reciprocating beam bedded in a free-moving manner and carrying the adequate test tool as well as a weight. The required scratching force in the range of (0.5 to 20)N is set by moving the weight along the reciprocating beam, making use of a setting scale (an additional load weight of (1 to 40)N is optionally available). The testing machine is equipped with a 4-position height adjustable load arm device with standard height of about 10 mm (+20/+40/+60 mm). To use the vertical adjustment, a set of sample clamping pieces are also required (Order No. 21010232). Operation (settings) is via a capacitive LCD display. To start a scratch/scribe test, the test tool is lowered onto the specimen when moving forward initiating the scratching process immediately. The test panel can be moved sideways so that a series of scratches can be carried out side by side with different force settings. Due to a ruler integrated in the slide plate, an uniform distance between the scratches can be achieved very easily. When testing insulating coatings on conducting substrates, an electric recognition of the through-scratching offers an additional security for setting the scratching force. For abrasion tests, crockmeter tests, MEK or wipe tests the test movement is carried out with the tool lowered onto the specimen, in preset cycles to and fro. For this, the guide plate has to be removed from the slide plate. The test speeds are freely adjustable. The LINEARTESTER Smart is equipped with variable stroke lengths. 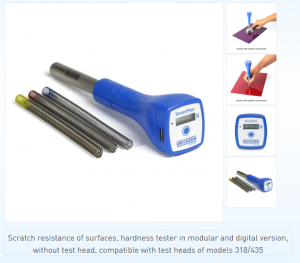 The ERICHSEN SmartPen is used to determine the scratch resistance of surfaces; depending on the used module, it can be used to determine the resistance to scratching, the tendency towards metal marking and the durability of printed markings.  With the ERICHSEN SmartPen, a modular hardness test pencil with digital test force setting and display (resolution 0.05 N) is now available. The SmartPen is supplied in a plastic case with three springs and a USB-C charging cable. 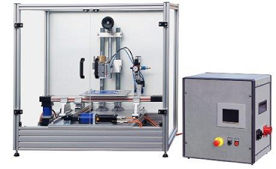 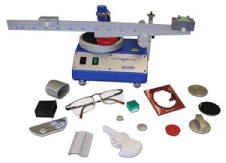 Scratch tester for surfaces, extremely finely graduated (0.01 N steps), with various test tips.  All methods that can be used with the SCRATCH HARDNESS TESTER 413 are basically based on the same method: The sample is mounted on a rotating table (number of revolutions in the standard version: 5 min-1). The test tool is attached to a load arm with adjustable weight that allows the tool pressure to be adjusted to the sample (load range of 0 – 10 N in 0.1 N increments and load range of 0 – 1 N in 0.01 N increments). The resistance of the sample to this effect is assessed visually using the scratch track (refer to the operating instructions for details).

This successful and extremely useful scratch hardness tester is in the form of a pocket instrument. Also for tests on curved surfaces. Carbide ball tip, diameter alternatively 0.5/0.75/1.0 mm. Spring force 0 – 20 N divided into 3 measuring ranges.  (Model 318S designed with rolling head)  This instrument has been designed for the measurement of the hardness of protective coatings. The degree of hardness of paint films, plastic coatings, etc. can be accurately measured and recorded with the Hardness Test Pencil, Models 318, 318 S and 318 C, no matter whether on a level or curved surface, small or large. 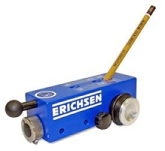 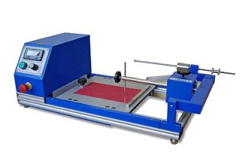 The optimized scratch hardness tester LINEARTESTER 249 is intended, in addition to its original purpose of application, i. e. to establish the ability of a surfaces to resist damage by scratching, also for several other tests: – Scribe/Scratch tests – To and fro-cycle abrasion tests – Crockmeter tests – MEK tests, tests determining the resistance against solvents in general or wipe test, respectively.  Scratching force in the range of (0.5 – 20) N, with electromotive drive, including circular level, power pack and operating manual. 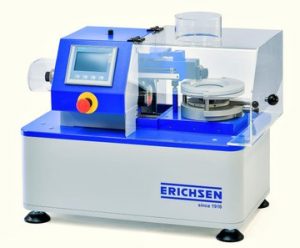