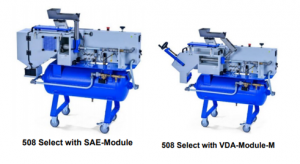 With the modular MULTI GRIT TESTER 508 Select, the user only needs a basic device which can be converted with little effort for bombardment tests “according to VDA” or “according to SAE”.  The clear arranged menu navigation via the touch panel has password-protected levels, which protect against unauthorized access (such as program changes). Depending on the application, a VDA module (with manual or pneumatic specimen applying device) or a SAE  module is selected. A change between the different modules designed as attachments is quick and easy, without spending lots of time. 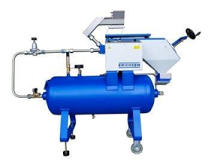 The MULTI GRIT TESTER 508 VDA is a stone hammer blow testing instrument that at first was developed in co-operation with the “Verband der Automobilindustrie (VDA)” (Association of the Automotive Industry) but now also meets the specifications of national and international standards. The MULTI GRIT TESTER 508 VDA is used to assess the ability of single and multiple layers of paints and similar coating materials to stand up to the impacts caused by small bodies of low mass hitting the specimen at high speed as experienced on road and rail vehicles and other equipment used in the transport field.    The new MULTI GRIT TESTER 508 SAE is a stone hammer blow testing instrument equipped with an adjustable impact angle, contrary to the execution of VDA.   508 VDA acc. To DIN EN ISO 20567-1, FORD FLTM BI 157-06, RENAULT D24 1702, PSA D24 1312, DAIMLER DBL 5416.   508 SAE acc. To  SAE J 400, ASTM D 3170.

Options include: Impact Cabinet RIMpact I (for models 508/SAE and VDA) Enables the user to test complete rims respectively and in principle several other larger sized specimens.

Practical test method to determine the quality of coated metal sheets by deformation in a sudden blow The Bend and Impact Tester is used to measure both flexibility and impact resistance of light gauge sheet metal, or tube stock, coatings in a single operation. The test simulates punching, beading, crimping and similar operations.

Portable and handy instrument especially designed for tests on enamel in accordance with DIN 51 155. Enables the user to carry out tests on site.