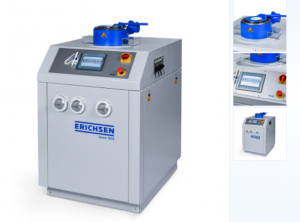 Application: This Testing Machine can be used not only to perform effortlessly, quickly and accurately all important and known deep drawing tests for ferrous and non-ferrous metals, but it is also designed for a large number of additional technological investigations like the ERICHSEN Cupping Test and the ERICHSEN Deep Drawing Cup Test on sheet and strips.

The Testing Machine is driven electro-hydraulically. The test sequence can be controlled automatically or manually, as desired. A programmable logic controller is used to control the functions of the machine. The testing machine is equipped with digital displays for indicating the sheet holder force, the drawing force. as well as the drawing punch stroke. The triple-acting hydraulic system in conjunction with the general design results in the following cost saving simplifications:

The Sheet Metal Testing Machine, Model 142-Basic, was developed for testing as a means for continuous production control using standardised and other established methods.