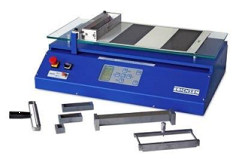 The Film Applicator and Drying Time Recorder COATMASTER 510/510 XL, enhanced successor of the worldwide established COATMASTER 509 MC, is a compact combined film application and testing instrument equipped with a foil keyboard, and performing two basic functions if the appropriate accessories are selected: the use as a high-precision film applicator, the determination of the degree of dryness in  accordance with DIN 53 150 and the performance of comparative drying tests. Exchangeable Specimen Platforms : Glass plate,  Vacuum suction plates for foils, papers and cards, in different versions – also electrically heatable, adjustable for temperatures up to 140°C (upon request up to 150 °C).

A film applicator with variable gap height. Clearance adjustable in the range 0 – 1000 microns by means of a micrometer screw (accuracy 1 microns). Available for film widths 80/150/220 mm

The UNICOATER 409 is a budget-priced, motor-driven film applicator for defined and reproducible application of coating materials on very different plain substrates.  Irregularities and inaccuracies inevitable when applying films by hand, are avoided using the UNICOATER 409.  This results in the following important advantages: – an even and reproducible film thickness over the whole surface – the possibility to produce very quickly a large number of identical samples.

An inexpensive special film applicator with 4 heights of gaps for widths of film 13/40/60/90 mm. Standard gap heights 30/60/90/120 microns. Also available for other wet film thicknesses in the range from 15 – 2000 microns. Model 360 is made of corrosion resistant steel.

Well proven film applicator for any kind of film forming liquid. Particularly suitable for applying films to flexible substrates. Available for film widths 80/150/220 mm and wet film thicknesses between 10 and 200 microns. Made of stainless steel.