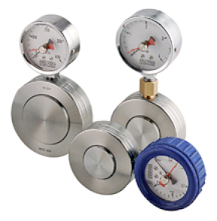 Hydraulic load cells are mainly used in static applications. The increased force time (referred to the rated load) should remain constant for at least 1 second. Continuous rapid changes in force may destroy the pressure gauge. It can however be protected against shock loads arising when the load is applied or removed by means of appropriate throttles. All load cells are made of stainless steel. 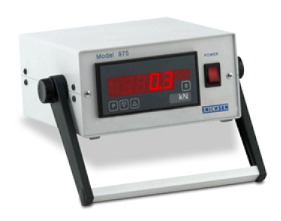 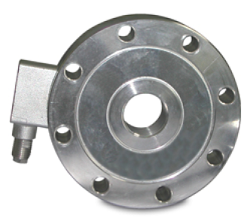 These force measuring devices are suitable for universal applications, namely wherever tensile and pressure forces need to be measured with a high degree of accuracy, e.g. in materials testing (Erichsen Tensile Testing Machines UNIMAT® and UNIMAT® + UNICONTROL ®), in reference measuring equipment and in research and development. For industrial purposes too, these force transducers are ideal in the fields of automation, controlling press-in processes and in jointing technology.  An extensive accessories program is available. A connection to the Measuring and Display Instruments 975 AP, 980 AP and PHYSIMETER 906 MC is also possible by means of an adapter plug.    Measuring range 5kN to 1000kN available. 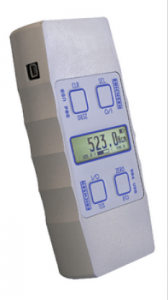 The Measuring System PHYSIMETER 906 USB is used for the acquisition of mechanical parameters based on wire strain gauge sensors. The ergonomically designed housing made of anodized, high-strength aluminum, is provided with threaded bores at the front side so that an unproblematic connection to the ERICHSEN testing machines is guaranteed – as it was also the case with the preceding models of tensile and pressure measuring devices. As an option a calibration according to VDI/VDE 2624 sheet 2.1 – Measurement of mechanical quantities – Instructions for calibration of mobile force measurement systems – is available.  With integrated or external force sensor and USB interface. 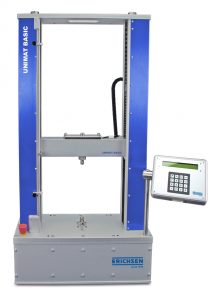 We recommend our serie UNIMAT® BASIC 054 testing machines for testing either hard and tough or soft specimens. These tensile testing machines are equipped with two columns and two recirculating ball screws which guide the travelling cross-arm. The upper fixed cross-arm and the base plate in conjunction with the travelling cross-arm between the two from two separate working areas.  Available in 10 kN and 20kN ranges. 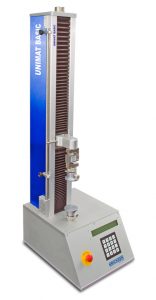 We recommend our serie UNIMAT® PLUS 052 testing machines for testing either hard and tough or soft specimens. These tensile testing machines are equipped with two columns and two recirculating ball screws which guide the travelling cross-arm. The upper fixed cross-arm and the base plate in conjunction with the travelling cross-arm between the two from two separate working areas.   Range 5kN.

The desktop model of the 050 series is small in dimension and require only a minimum of space. The spindle-driven cross-arm runs through two supports which are arranged behind each other and connected at the top by a fixed cross-arm. The lower part of the supports joins a base plate which forms the upper element of a sturdy sheet metal casing. The Model 050 has an electric drive by speedcontrolled DC motor and recirculating ball screw.  Range 2kN. 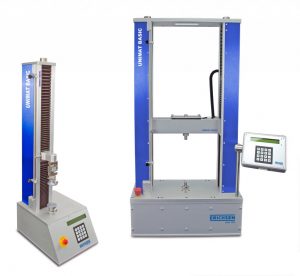 The compact material testing machines of the UNIMAT® BASIC series have been specifically designed to facilitate quality checks simple and fast. The   machines   are   available   with   a   capacity  of 3 kN, 5 kN, 10 kN or 20 kN (higher forces on request).  The robust construction of massive aluminum and stainless steel makes these testing machines suitable for in-process controls. For driving the cross-arm the Universal Testing Machines are equipped with electric motor drive (microprocessor-controlled, recirculating ball screw and bellows).
The motor including controls as well as the measurement and control system are integrated into the desktop housing. The force is measured via a strain gauge load cell.  All testing machines can also be operated as a stand-alone version (with internal software) – without a PC – or with an external Windows program. The testing machines operated via control panel with foil keypad (LCD with 2-line display).  (at models 050/052 – integrated into housing; at model 054/056 – side mounting or by remote control)